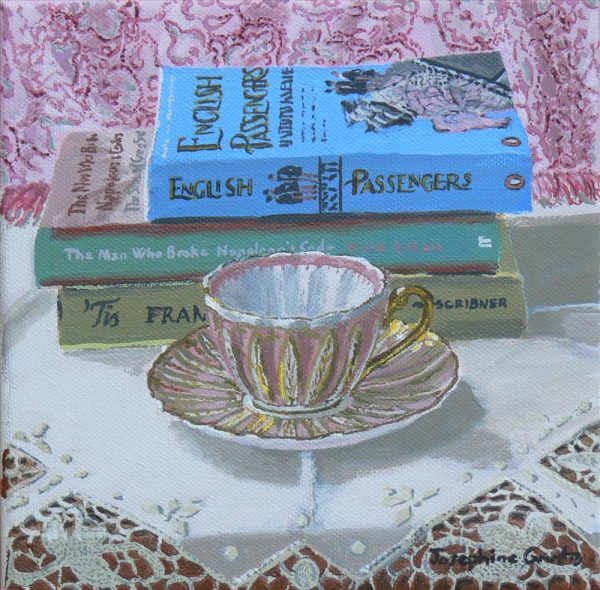 Josephine Grant has been exhibiting since 1988, and has shown her work in nine solo exhibitions, in England, Washington DC, USA, France, Mexico City and Ireland, as well as in mixed exhibitions in New Zealand, Spain, and The Netherlands.

She employs watercolours and oils with equal facility, and captures the effects of natural light on surfaces both textured and reflecting, with the light passing through windows, to fall on furniture and furnishings, polished floors, patterned carpets, and draped fabrics. She pays no less attention to the small things of life: a cup and saucer; a pile of books; a cat at a window.

The world outside the home is revealed in a series of gardens, terraces, and old stone walls bearing flowers and foliage.

Her work in the last few years has included commissions from the Hon. Desmond Guinness, for paintings of the interiors of his home at Leixlip Castle.

Josephine Grant studied drawing at Canterbury School of Art, and painting, privately, in California and in Canada. Her early work was in pen and ink, before moving on to explore other media. From 1980 to 1994 she was the proprietor of Avening House Galleries in Gloucestershire, England, where she specialised in early 20th century and contemporary paintings, beginning to exhibit her own work there from 1988. She now divides her time between France and Ireland, where she finds subjects which demonstrate the differing qualities of light and atmosphere in each place.

Outside her work her interests include shared music making with her husband, needlework, and garden-making; also her extended family – six sons and daughters, and, to date, fifteen grandchildren, including extras.