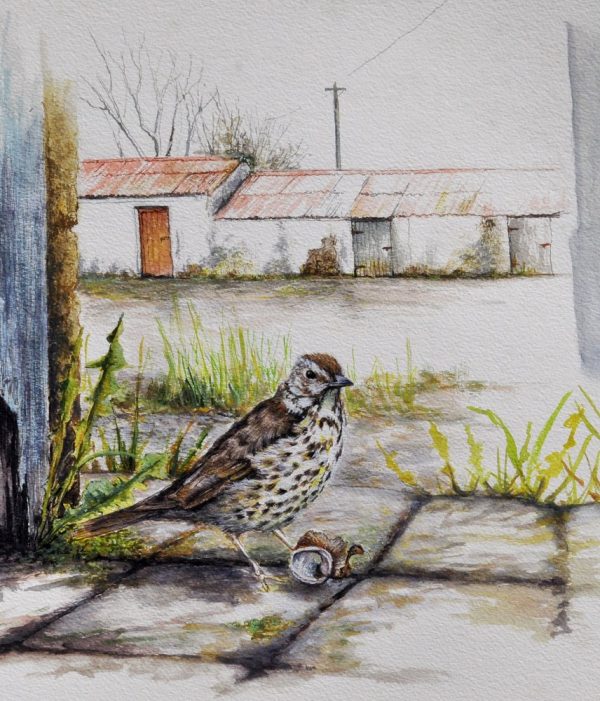 In the early 1980’s Sarah was given a much sought after opportunity of an apprenticeship with one of the UK’s most prestigious restorers of painted and decorated antiques in London, where she worked on very important pieces including some for the V & A and in the palace of Westminster, but found she needed to move out of the city to be closer to nature and for many years ran her own decorative arts business in the countryside, also increasingly selling her own paintings, until after  moving to Ireland seventeen years ago she finally had took the plunge to concentrate solely on her paintings. Sarah has exhibited with Origin Gallery, Dublin, the Lee Gallery, cork, the Slane art gallery and now at the Kilcock art Gallery and has had ten solo exhibitions in Ireland, selling well to both private and corporate collectors and two of her paintings have been purchased for the state art collection of Ireland. Sarah has had two residencies at the Cill Rialaig artist’s retreat in Kerry where the dramatic beauty of the Atlantic coast and artistic freedom created by the retreat proved hugely inspiring. Her paintings have sold to private collectors in Ireland, UK, France and America.

Sarah has also exhibited in the UK with Gladwell and Patterson’s of Mayfair, London and Asgard Art gallery. In 2016 she was exhibited as a finalist in the National Open Art exhibition, a juried exhibition that was held at the famous ‘Mercers Hall’ in the City of London. Her work has been featured in magazines.

In 2018 Sarah was awarded as a finalist in the ‘International artist’ open wildlife art competition in America and her painting was then featured in their magazine.  One of her paintings was shortlisted in the 2018 Jackson’s Open painting prize, London; she exhibited at the 2018 annual Botanical & floral exhibition, at Bloom and also exhibited in the Cashel arts festival. In 2019 her work was exhibited at the Origin Art gallery, Dublin as part of the group show ‘thy Kingdom Come, Kerry Painted’

Sarah publishes some of her work as limited-edition prints and in 2018 she wrote and published a book about her work entitled ‘Scattered with light, painting the beauty of nature’

Following her art studies at College in Richmond upon Thames, Sarah was fortunate to secure a much sought after opportunity to work for one of the U.K.’s foremost restorers of painted and decorated Antiques, a Mr. Reginald Dudman. During her years with Mr. Dudman she gained a wealth of knowledge and understanding of the techniques of period master craftsmen and Artists. Sarah worked on some of the most important pieces for private collectors, antiques trade and museums, including the Victoria and Albert Museum and the Science Museum. Notable individual pieces including an ornate gilded chair belonging to napoleon and a painted piece attributed to Whistler.

One of her most important projects in the 1980’s was working on the restoration of the painted and gilded canopy that houses the throne from where the Queen opens Parliament in the House of Lords, Palace of Westminster.

On leaving Reginald Dudman’s studio Sarah moved from London to the beautiful Dorset countryside. For approximately 16 years, she ran her own decorative applied arts and restoration business using the many skills she had learned, including Gilding, Marbling, Graining , Japanning and period fine art. Her many clients included the Hon. T. Lindsay of Hedingham Castle (artist and art restorer). She exhibited her own original decorative work and paintings at such venues as Longleat House, Chaterhouse School, Highclere Castle, Losely House, Surrey and Waterperry House, Oxfordshire.

During this time Sarah developed a keen interest in nature and wildlife. This inspired her more and more to concentrate on her own paintings. Receiving very positive responses to her artwork gave her the confidence to concentrate totally on her own paintings. After visiting Ireland in 2001 and falling in love with the truly beautiful countryside, Sarah and her partner Richard decided to sell up in Dorset in the U.K. and move to Tipperary, where they purchased a cottage with some land, where she now has her studio, paints and they grow their own vegetables, living the life at the pace both Richard and herself desire.

Sarah was invited by the president of the all Ireland Polo Club (who has a painting by Sarah in his collection) to exhibit her 2010 collection of Polo paintings at the Pavillion Club House in the Phoenix Park, Dublin.

In 2012 Sarah received permission from Darley (Sheikh Mohammed Al Maktoum’s global breeding operation which currently stands Stallions in six countries around the world including Ireland) to enter her portrait of the horse ‘Royal Applause Standing at the Royal studs, Sandringham into an international art competition.

She has received the welcome of fellow artists in Tipperary and their generous advice and support, such as Jessica Roth and the renowned artist Mr. Peter Curling, who was her guest of honour at Sarah’s second solo exhibition at the Origin Gallery- “the Light of Nature” where he gave the opening words. The following comment he made for a recent catalogue.

“Sarah’s paintings show a remarkable feel for the Irish landscape, wildlife and all animals in their natural surroundings. Her unique handling of oil paints and her subtle palette give her paintings a special light and help her to capture the stillness of the quiet corners she chooses to paint. Her affinity to nature comes across strongly and the smaller details in her paintings have been closely observed, giving the work an authenticity that is rarely found”…                      Peter Curling

One of Sarah’s paintings was long listed in the Jackson’s 2018 open painting prize and another painting was a finalist in the International Artist magazine (USA) wildlife art open completion 2018 ( her painting was then featured in the magazine). Her work has been feature in other magazines such as the Woodland magazine, published by the Irish Native Woodland trust.

Sarah believes in passing on the skill she has learned and tutors art classes in County Tipperary in the spring and autumn.

Sarah publishes some of her work as limited edition prints and in 2018 Sarah wrote and published a book about her work entitled “Scattered with light, painting the beauty of nature” in which she shows her method and inspiration behind her paintings.

In 2018 Sarah was invited to join the AERA (association embracing realistic art) which is an international association of artists that promotes a fuller appreciation and understanding of realistic art.

“My own view of my efforts as an artist is that with all the knowledge and skill that I have through both nature and nurture, I try to portray the beauty of the natural world as I perceive it, whether it is found in the humble or grand arena. If I can touch on that it is my key to truly appreciating this world around us, so often taken for granted. Painting it seems is in my blood, my Mother was a gifted artist and she brought be up to draw and paint as second nature and also inspired me in my love of all living things.”                                              Sarah Corner