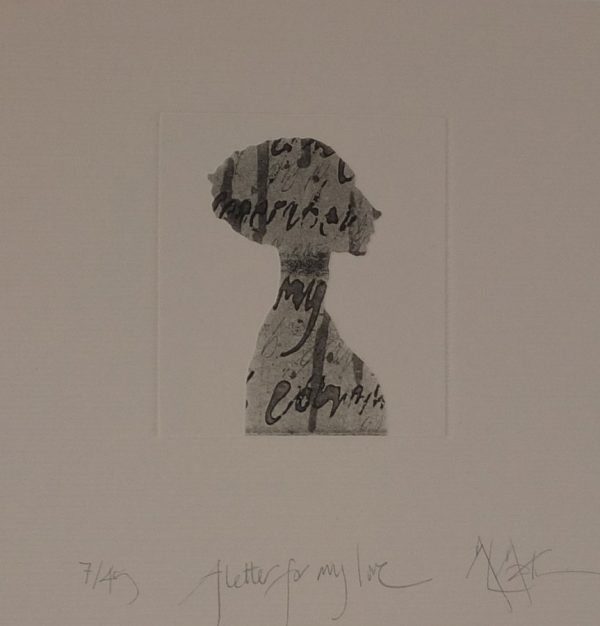 “My work is strongly influenced by both the landscape of Italy and its cultural references. I am interested in the patterns of trees, shadows, fields and how they change through the passage of time.

Lately I have returned to a subject I worked with many years ago, using early Florentine portraits as a starting point, but now with modern day models. Some of the prints are surrounded by embossed “frames”. In the “Dream” series, these landscapes are contained within a woman’s profile; so, in this way combining two themes.

I graduated from NCAD in 1983, in Fine Art, and subsequently joined the Blackchuch Print Studio, where I served as a director for eight years. I established the Airfield print studio, in Dundrum, and I am now an active member of the Graphic Studio.

My work has been included in a number of national and international shows; the United Arts Club, Dublin; the three Royal Academies (RHA, Dublin, RUA, Belfast and Royal Academy, London); the V&A Museum, London (where two pieces are in the permanent collection), La Page 35, Paris, a solo show in La Marais; New York International miniprint exhibition; and importantly for me, as it form the basis of a great deal of my inspiration, Radicondoli, a small hill town in Siena.

I have been awarded three important prizes in my career; one in the RHA, two in the RUA, and last year, I received an ‘Honourable Mention’ in New York.

As a member of the Printmaker’s Council in UK, I am invited to show with them in their very many shows all over UK. The Graphic Studio in Dublin also invite me to show in annual, and ad hoc shows; most recently in the two fundraisers for the National Botanic Gardens in Glasnevin. I have twice taken invited residencies in Cill Rialaig in Kerry.

Important collections containing my work are also national and international: